On May 11, 2012 we took the Adria Airline flight for Kosovo.  Upon arrival  at Kosovo, after an airplane flight of one (1) hour and forty five(45) minutes  I found no difficulty passing through immigration but Krisvi’s  passport was held under scrutiny where the other tall immigration officers were told to similarly look thereto.

Suddenly I felt chill and nervousness in my entire body thinking of a similar scenario in Bulgaria where due to the absence of Schengen visa we were arrested and detained and transported to Budapest, Hungary then to Montenegro in handcuffed hands  which lasted for four (4) days.

Krisvi told them she was with her boss pointing at me.  I purposely placed myself at a close location anticipating for such an eventuality. With a “do” or “die” attitude I positively looked at their eyes affirming that what she was saying was correct.  My positive gesture paid off when they placed the immigration stamp of approval on Krisvi’s passport.

While driving to Hotel Sirius I saw small red brick houses sporadically spread along the grassland.  Upon entering Pristina I saw the big photo in the wall of past US President Bill Clinton and his statue.

Upon arrival at Pristina proper, we checked in at the Hotel Sirius.  True to their name they appear serious in providing good service consistent with their claim as being a five-(5) star hotel.   The bell boy assured that Pristina is the most peaceful place in the world and that we could roam around any in part of the area, night or day.

We thereafter called up the tour organizer Fisnik.  He told that he would be coming within thirty (30) minutes thus allowing us to take a rest for a while.  We saw him to be a very young person.  He told us that the majority of the people uplifting Kosovo belongs to the younger group as most of the older group had already perished during the war.

We were accompanied to the boulevard where people leisurely walk with restaurants, booksellers, vendors selling flowers, Kosovo souvenirs made from China, mineral stones and other miscellaneous things.

On May 12, 2012 we woke up at 0600 to visit by walking the other parts of Pristina.  Passing through the unpaved winding road we reached their park. After the park we walked through their main road. At 0700 we took our breakfast.  At 0800 we mailed perceived excess luggages. At 0900 we saw our tour guide  Ilir where he brought us first to a Serbian prison cell designed like a mosque with a cross as a distinguishing feature on top. 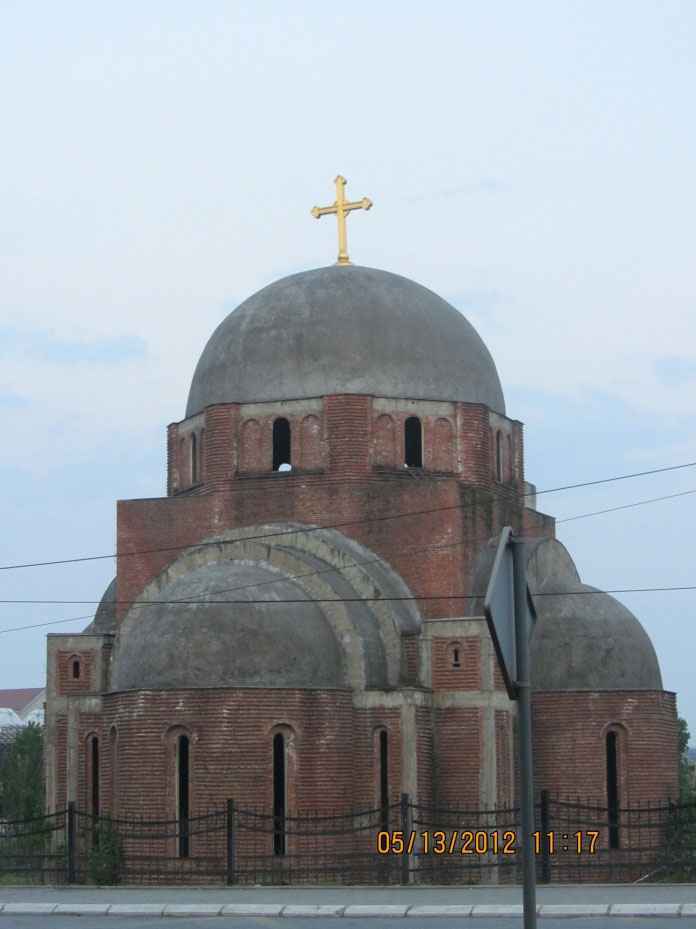 Then he brought us to  the National University Library of Kosovo with its beautiful architecture  with the symbolic  Kosovan hats serving as accents. Then we visited  the Mosque of the King which was built between 1460-1461 by Sultan Mehmed II al-Fatih Conqueror, eight(8) years after the fall of Constantinople. 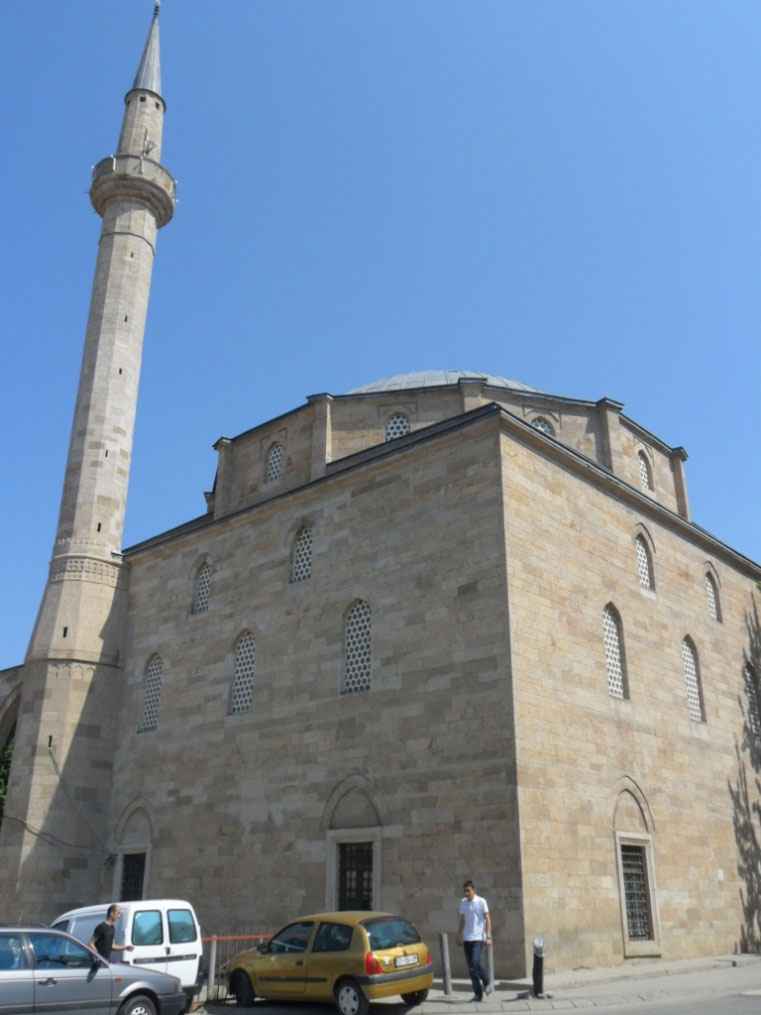 Then we visited Ethnological Museum which is a traditional Eighteenth(18th) Century House inside a walled complex. Inside the Museum are traditional clothes , things used   during  birth, during lifetime and death. We had our photos taken at a place where the  raised cemented big letters spelled  NEW BORN were located. It is symbolic of their recent acquisition of their independence four (4) years earlier on 2009. I thereafter bought Kosovan souvenirs. Thereafter we took our lunch comprising predominantly of green salads with a local beer called Peja   at a restaurant suggested by Ilir.

Realizing that my bag was still heavy worsened  by the heavy old Kosovan flatiron I just bought, I decided to mail some more of the unneeded items for the following day at 0800 prior to our tour at 0900 the following day.

We firstly visited the 14th century Gracanica Monastery where we were prohibited to take photos.  Upon  witnessing that one of the church goers was boldly taking photo  of the church proceedings, we took shots also of the iconic paintings on the walls.

We were again prohibited from taking  photos thus prompting us to  leave immediately without anymore arguing due to language barrier despite the  perceived discrimination.

At 0900 we visited the place where the Battle of Kosovo took place in 1389 which is the famous battle in the Balkans where both leaders Ottoman Sultan Murad I and Serbian Prince Lazar were killed. Thereafter we proceeded to the boundary between Kosovo and Macedonia in my desire to increase my travel credits under the Travel Century Club(TCC) listing where they would give credit to a mere stopover to the country.  It leads therefore to the question whether or not a visit to the boundary of Macedonia  towards would bring TCC credit for a visit to Macedonia. Thereafter after buying the Kosovan big bread and had a cup of coffee for dinner we proceeded back to Pristina where we spent the whole afternoon trying to work out the minutes of the meeting of Ayala Heights where Krisvi would go down to type at the computer the corrected versions thereof and to bring them in the room at the eight (8th) floor to check on the same  without the help of the laptop which was not working any longer.

The work nevertheless remained unfinished. On May 14, 2012 which is the departure date we had the usual morning walk once more.  We saw the statues of Mother Theresa being sold at a Novelty Store  prompting me to ask myself why it was so considering that most of her lifetime was focused on the poor people of Calcutta,India. While browsing over the Kosovo Tour Book, the answer was found in one of the pages thereof where she is quoted to have made the following  declaration:  “By blood and origin I am Albanian.  My citizenship is Indian.   As to my calling, I belong to the whole world.  I belong entirely to the heart of Jesus.”

Considering that our departure flight is still  in the evening, it was decided during the preceding day that we would visit Prizren,which is the region adjacent to Albania.

We firstly saw  the preserved Amman or bathhouse. Then we saw the Museum housed in the place held a general meeting with three hundred  (300) delegates leading to the formation of the Albanian League. When the European diplomacy had denied the existence of the Albanian nation, the Albanians during this meeting decided to fight heroically, refusing to kneel and fearing no one. We thereafter visited a souvenir store where I decided to buy the statue of Mother Theresa.

I heard from Ilir that he would like to be provided by us with a photo of the slippery road because his friend broke his ankle while climbing through this road. We passed also through the 15th century stone bridge on our way to partake our lunch. Upon reaching the restaurant we saw from afar another souvenir store prompting to cross the bridge once more.  I bought a statue of the acknowledged popular heroic figure in a fighting form thus increasing once more the weight of the things I would be bringing back to the Philippines.

Thereafter we drove to the border of Kosovo and Albania, particularly Skopje. Thereafter we drove back to Pristhina to hopefully arrive in time for our Turkish airline flight to Hong Kong to take our flight to Manila via Philippine Airlines.  Along the way, we got nervous when he said that he failed to fill up the gas thus creating once more  jitters on what would happen to us if the car would stop at the middle of the road amidst the continuing bad weather.

I prayed therefore deep inside and then we saw a gasoline station.  We passed by also a Mental Hospital which according to Ilir accommodates numerous deranged individuals including homosexuals who considered outcasts of society under Muslim laws.  According to him, it is a sad sight when they would be seen roaming around spaces in the Hospital devoid of any clothings.

Thank you Lord for allowing us to visit the embattled place of Kosovo.