PPTF President’s Speech on the Occasion of Joint PPTF and PIAP GMM on February 20, 2013 at Manila Polo Club

PPTF President’s Speech on the Occasion of Joint PPTF and PIAP GMM on February 20, 2013 at Manila Polo Club

Greetings to the PPTF Members and stakeholders in the printing industry as we commence our activities for 2013.

At the outset, the undersigned wishes to express his thanks to Copylandia through its President and Executive Vice-President Nonoy and Bernadette Juarez not only for sponsoring this joint PIAP and PPTF Annual General Meeting but more importantly as a precedent setting, gesture for the unification of the industry through the involvement initially of the two (2) above-cited associations with sizable memberships.

The undersigned (Pres. Buhain) wishes to reiterate once more his deepest thanks to Divine Almighty for giving him the gift of economic, survival and life to respond to the challenges of earthly existence and also to the PPTF membership for again reposing their trust and confidence for him to continue leadership of PPTF for 2013 to 2014.

Allow me first to introduce to you the incumbent officers and committee chairs of the PPTF:

Trustee and Concurrently Chairperson of Wellness and Website Committees Feliciano A. Juarez, Jr. ;

Pres. Buhain wishes to report on some noteworthy developments after the PPTF Christmas Party and Annual General Membership Meeting on December 13, 2012 (PPTF AGM):

• On December 20, 2012 Pres. Buhain in his capacity as representative of the Rex Printing Company, Incorporated a long time member of the Print Industry Association of the Philippines (PIAP) coupled with the personal invitation from then PIAP President Ric Tansipek, in his capacity as PPTF President, attended the PIAP Christmas Party and Annual General Membership Meeting (PIAP AGM);

A.1 Towards the latter part of the PIAP AGM , Pres. Buhain was invited at the podium and he affirmed once more on what transpired during the PPTF AGM on December 14, 2012 in his capacity as President that PPTF through himself accepted the offer of support and partnership by PIAP through its then Pres. Tansipek; 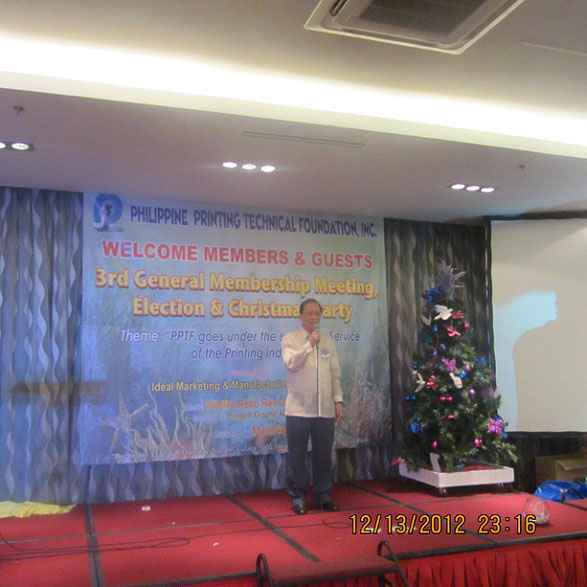 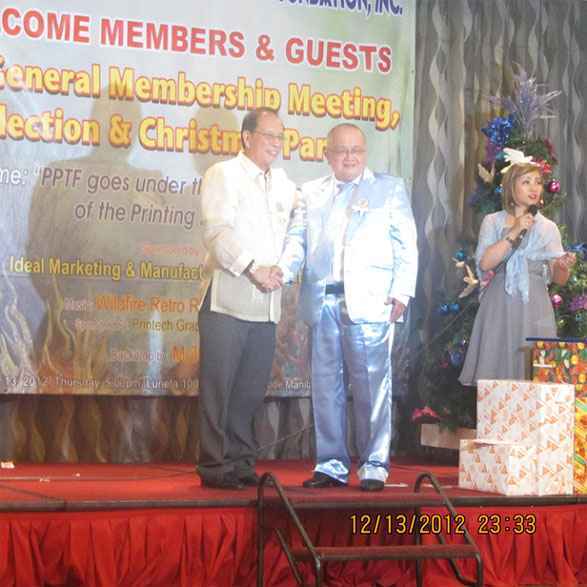 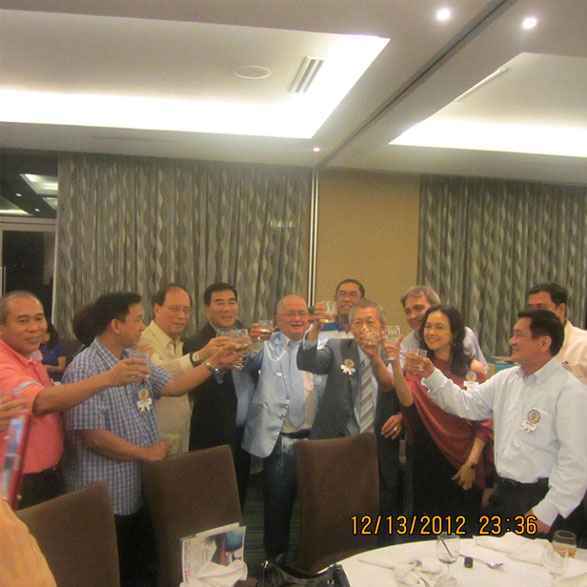 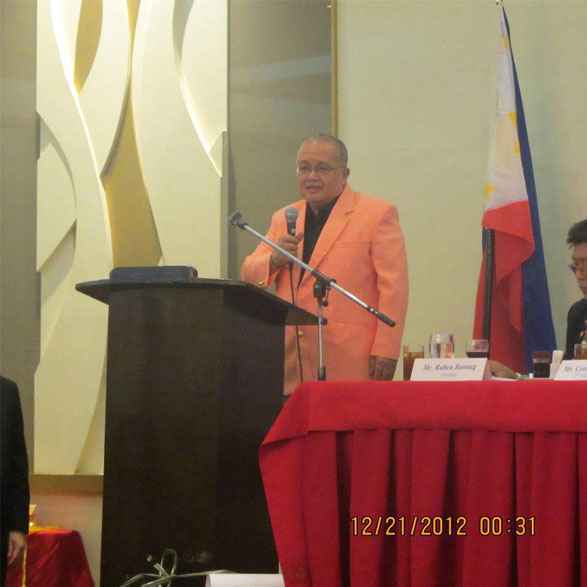 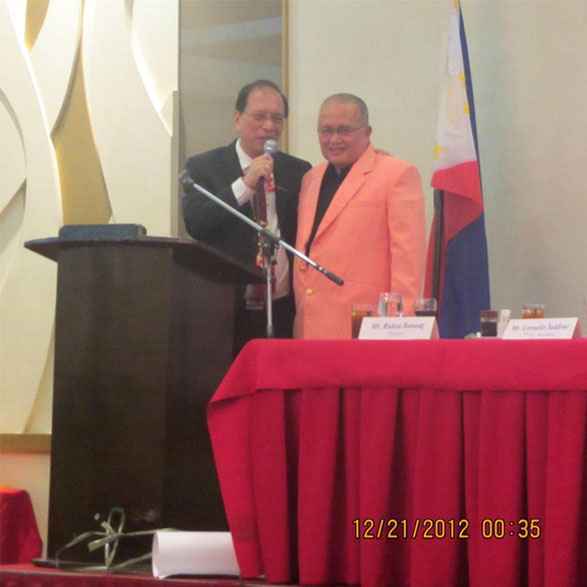 A.2 Pres. Buhain observed that the elected Officers and Directors during the PIAP event except President Emeritus and Director John Choa (PE Choa) were all sworn into Office; 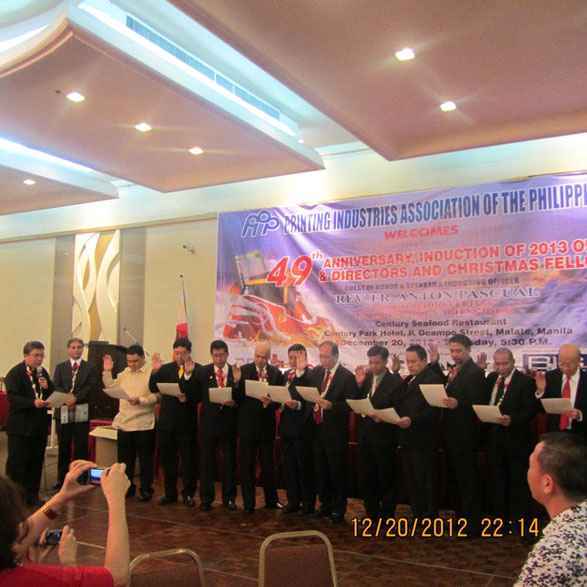 A.2.1 Likewise,Pres. Buhain received a written opposition on the proceedings from PE Choa;

A.4 Though Pres. Buhain is devoid of any prerogative to meddle considering that the personalities involved include my long time friend PE John Choa even way back during the National Book Development Board or NBDB days( when RA 8047 creating the Board was signed into a law inJune,2005) and friends in the persons of Ric Tansipec ,Ronnie Sy and others in the PIAP hierarchy of leadership, he is just apprehensive that the long time desire for PPTF and PIAP to unite and complement with one another which showed somehow a glimmer of hope after almost thirty(30) years would once more become illusory;

A.5 The observation that two (2) validly elected Presidents of PPTF and PIAP declared publicly their mutual support or unity with one another during two (2) distinct General Membership Meetings one for PPTF and PIAP without any objections would create immediately the presumption of validity and that the same must be upheld until proven otherwise through a quasi-judicial or judicial determinations;

A.6 It is not anymore a discussion of trying to compete with one another or one being richer than the other creating the impression that one would financially benefit from the other but what is at stake is whether or not the desired unity would be for the upliftment of the industry which Pres. Buhain thinks to be so where the respective strengths of both associations would complement one another for their mutual and economic benefit;

A.6.1 Another incidental benefit is the economic help we would be providing our suppliers by not requiring them to join various exhibits with minimal crowds but for them to attend only few exhibits with bigger audience thus any savings on time and money they would derive therefrom may be reciprocated back to the printer-stakeholders in the form of better prices and services due to the eradication of duplicitous or multiplicitous overhead;

⦁ Some of the noteworthy developments as forming part of the Minutes of the January 10, 2013 Regular Board Meeting include the following: 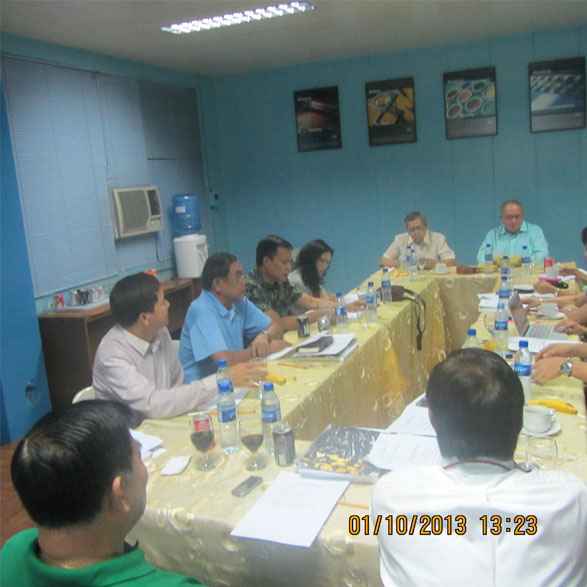 B.1 The need to fast-track the transfer of title of the Makati lot ( where the envisioned printing school would be built) to PPTF not later than February, 2013 which prompted PPTF to cause the payment of penalties due to delinquency way back ;

B.1.1 Once the transfer of the lot’s names to PPTF would be achieved the tax exemption privilege for any donation for PPTF which became unoperational due to erstwhile nonpayment of penalties would be revived;

B.1.2 The informal settlers occupying the lot would be given six (6) months to hold possession of the lot where reasonable rentals would be imposed and after the lapse of the above-cited period, the appropriate case shall be filed;

B.2 The initiative of Copylandia under the leadership of Trustee Nonoy (who is the concurrent PPTF Chairperson of the Research and Wellness Committee) and Bernadette Juarez for having conducted a feeding program for thirty thousand (30,000) children nationwide by providing budgetary allocation of Twenty Pesos (P20.00) vegetarian meal per child has received favorable endorsement from PPTF;

B.3 The report of Trustee Juarez on the move of the Printing Industry of America of opposing Goggle’s project of pursuing a Paperless Society in 2013 has been also given favorable endorsement by PPTF;

B.4 The revival of Fun Run which is a Subcommittee Project of the Ways and Means Committee under the Chairmanship of Trustee Michael Yao and co-chaired by Trustee De la Rosa sometime in April or May, 2013 at the University of the Philippines was given approval by PPTF;

B.4.1 Similarly ,the holding of the Bingo Social in October, 2013 was given approval by PPTF;

B.4.2 The holding of a Raffle with One Million Pesos (P1,000,000.00) in cash prizes including a car for the 2013 December PPTF General Membership Meeting and Christmas Party is being tabled for approval;

B.5 The circularization of survey forms by PPTF through the Business Assistance Committee under the chairmanship of Treas. Chiu on the different ways PPTF could be of help in enhancing the respective businesses of the Members consistent with the PPTF objectives was also approved ;

B.6 The report of the Special Projects Committee Focusing on Domestic Exhibit and Regional Alliance Committee under the Chairmanship of PP Lora was also noted on the following:

B.6.1 On PPTF’s intention as conveyed to the Iloilo Printers’ Association through its President Mr. Rosendo Mojica to conduct a seminar in Iloilo on the possible topic of “How to Start a Small Printing Press;”

B.6.2 Discussion with John Lagdameo of the Training Need Analysis of Panorama Printing;

B.6.3 The induction of the elected officers of the Cebu Printers’ Association on January 25, 2013;

B.6.4 The long awaited Bicol trip which is hoped to be realized during the first quarter of 2013;

B.6.5 The pending discussion with Davao;

B.6.6 That Philippine Center for Print Excellence or PIAP was conducting seminars in Davao;

B.6.7 The proposal that PPTF should conduct joint project with PIAP on seminars which was responded to by Trustee Juarez that Copylandia would sponsor the upcoming joint meeting with PIAP on February 20,2013 at the Manila Polo Club;

B.7 The report by the Special Projects Focusing on Foreign Exhibits and International Alliance Committee under its Chairperson Aud. Liwanag that there would be eleven(11) foreign travels this year 2013;

B.7.1 The dissemination of the survey form to ascertain from the PPTF Membership their preference on which foreign exhibits they would like to attend;

B.7.2 The holding of the Flexo grant of awards in November 2013 in the Philippines;

B.8 The report by the Human Resource Committee under the Chairmanship of Corp. Sec. Besmonte about the TESDA-PPTF MOA wherein the signature of Pres. Buhain had already been affixed;

B.8.1 The transmittal of the signed MOA to TESDA for processing;

B.9 The issuance of a letter of authority by Pres. Buhain to Treas. Chiu to coordinate joint undertakings with PIAP;

B.10 The resolution by the Board to expand the membership of the Executive Committee to include the President,

⦁ That the President’s Report during the intervening period after the January 10,2013 include the following highlights:

C.1 That on January 23, 2013 Pres. Buhain together with Treas. Chiu, Corp. Sec. Besmonte and Aud. Liwanag and Assistant Krisvi for the PPTF side; President Ronnie Sy, Past President and Secretary General Enrique Tansipec(PP Tansipec) and Vice-President Cornelio Zaldivar for the PIAP side, National Book Development Board Representative Milagros De Guzman, Executive Director Imelda Taganas for the TESDA side and Executive Director Leo De Jesus, Merle Escobar for the APO side and Board of Investment(BOI) Director Eries Cagayan (BOI Director Cagayan) attended a meeting with TESDA through Deputy Director General for Sectoral TVET Irene Isaac (Dir. Isaac) on the rationalization of the printing industry in the Philippine setting; 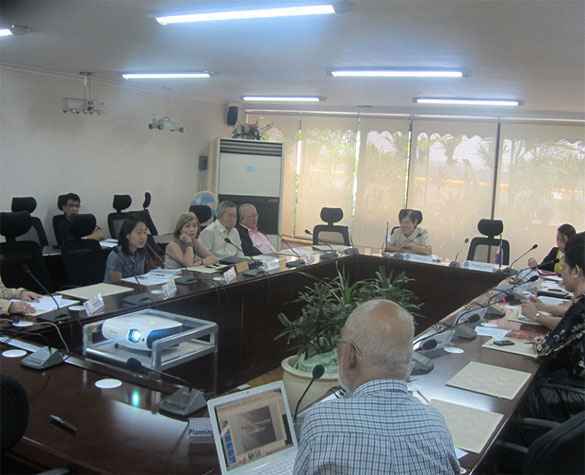 C.2 Pres. Buhain took the opportunity to inquire from Dir. Isaac whether TESDA has updated status on the printing industry to which the latter replied that there was none;

C.2.1 According to Pres. Buhain, the rational behind the query is that during international gatherings particularly the Forum of Asia Pacific Graphic Art Technology or FAGAT( and again he would be attending in India during the month of February,2013) he would cite the state of technology under Philippine setting with general and flowery pronouncements devoid of statistical data unlike our counterparts in Japan, Korea, China, Thailand, Sri Lanka, India, Australia, New Zealand, etc. where they would zero in with their relevant facts and figures using high tech devices with the brief time allotted;

C.5 BOI Dir. Cagayan suggested on the formulation of a road map to enhance the printing industry in general;

C.6 The group yielded that a professional group be tapped to formulate the road map;

C.7 During the discussion on the proposal to come up with a Training Center for Graphic Arts, Treas. Chiu inquired on what had happened to the Print Industry Board Foundation or PIBF which was incorporated on August 11,1983 with the following incorporators:

having a certificate of deposit of Six Hundred Nineteen Thousand Six Hundred Twenty Four Pesos(P619,624.26) which could have the same purpose as the proposed Training Center for Graphic Arts, Inc. to which there was no clear cut answer from the group;

⦁ On February 9, 2013 the PPTF’s Second (2nd) Regular Board Meeting from 1000 to 1200 and Planning Sessions from 1300 to1699 took place with photos provided hereunder although the minutes would still be submitted later: 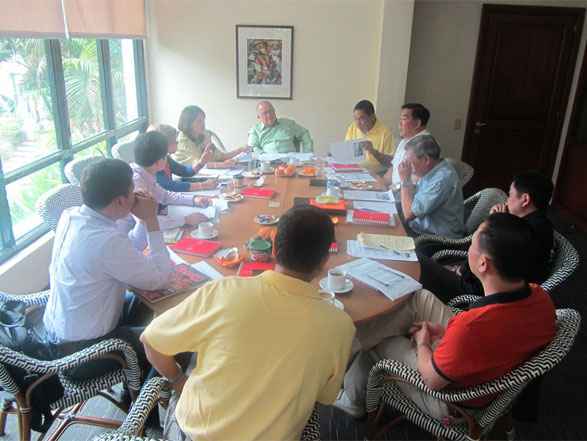 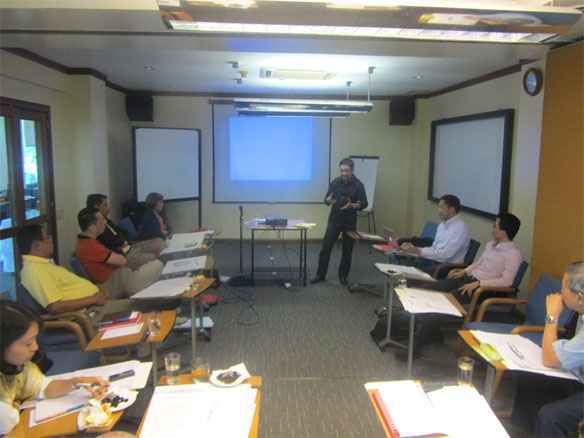 ⦁ During the last meeting on February 13, 2013 Pres. Buhain tried to rationalize the discussion with TESDA by inquiring from the participants present on which should be acknowledged as the official representative of the industry to work out things with TESDA; E.1 APO Neda Executive Director Leo De Jesus was of the view that the newly designated Training Center for Graphic Arts should supersede the PIBF prompting Pres. Buhain to inquire from the other participants whether they were similarly supportive of ED De Jesus view;

E.2 PIAP Pres. Sy, Treas. Chiu, PE Brizuela, Pres. Buhain which constitute the majority was for the revival of the PIBF to serve as official umbrella group to be consulted by TESDA for the formulation of training programs under Philippine setting;

E.3 Pending reconstitution of PIBF the loose organization presently meeting with TESDA shall serve as the official consultative body of TESDA and that Boy Kitane and former PPTF Trustee Ileto were authorized to act as intermediaries;

In conclusion the primordial reason for the establishment of associations is to assist the industry, its stakeholders and its suppliers nothing else. We could never go wrong if this would be our aspirations. Thank you very much.